This forum is the place for Mutants & Masterminds Play-By-Post games. Please read the M&M Game Room rules before starting or joining a game. Enjoy!
Locked
216 posts

Goku is revised. I think I fixed all the issues and hopefully it's easier to read now. Also added a complication that popped out at me after Goku met Elsa.
"This is all your fault! You shouldn't have taken that cat! You don't teleport into strange metal places and steal pets!"
Builds
Top

Who have I not looked over yet?

You haven't said anything about my changes, which are done now.

Evo - Smoke looks good to me, I'm just still wondering what the descriptor is on his Eye/Veil of Lin Kuei : Are these magical, chi, supernatural, ninja training techniqes?
Top

I know what I forgot : I didn't run down Elsa!

I would point out that agility and dexterity aren't really worth it for you since you're not using ANY of the associated skills with them. I would suggest lowering those and getting your dodge & Ranged combat via other means.
Likewise, since you don't use melee attacks, having points in Fighting is counterproductive. You could just buy the appropriate level of Parry (Which is the only thing you're using out of it anyways).
All of these are literally half the cost of buying the abilities.

You actually have 25 skill points here. To make it 12p you need to drop a skill point.
Also, these are some really low totals for a pl 10+ game. I would suggest trying to find some more points to get the ones you actually plan on using up to 10 or higher if you plan on

You have no attacks that require ranged attack rolls, so Ranged Attack is pointless.
Likewise, you have no tripping ability, so Imp Trip isn't a good idea.
Also, with such a low intimidation score, Startle will not be useful.

Are you sure you want it fully uncontrolled? That means you have NO control over it, I just get to turn it on whenever I feel like.
Perhaps you should try using Unreliable (You have a 50/50 chance of activating it whenever you try), and then add a Complication wherin it sometimes goes off when you're stressed.
Also, Since this seeems like mostly a fluff power, I would sugest only 1 or 2 ranks in it. a 60' burst is still pretty big, and paying the extra 8pp to increase that to 250' radius could be cool (No pun intended) in another game, but this is a primarily COMBAT focused game (Present pleasant chatting aside), and the increased size isn't really useful.

Extreme Cold does not inflict any movement penalties, so environmental adaptation is not required for it. Maybe 'dense snow'?

Limits on Skills change them from 1/2 ranks to 1/3 ranks (not 1/4), per the usual 'fractional costs' modifier rulings in the powers chapter.

I would HIGHLY suggest upping this to PL Cap. As has been pointed out before, this is a COMBAT focused game, so not having offense/defense at PL Caps is going to be a major detriment, as I can assure you that all of your opponents WILL be capped (And some of them are PL 12+)

Like with your 'icicle barrage' damage, this is below cap and should be increased.
Also the size on it seems like over-kill, especially in a game that's not going to have a lot of massed force fighting.
Also, what does the 'athletics' mean?

Finally, I would highly suggest making your Create, Damage, and Affliction powers part of an 'ice control' array to make up for the extra cost you'll need to bring your character up to PL Caps. You won't be using them at the same time anyways, and stuff like that is exactly what alternate powers were made for.

First off, you counted the DC wrong for Icicle Barrage. Damage powers have a DC of 15+rank, not 10+rank like everything else, so it should be 15+8=23. (Also see my notes on your powers about upping this).

Second : Area effects do not use attack bonus. When you have an Area Power, anybody caught in the area makes a Dodge save vs DC 10 + Rank (So 18 in this case).
If they FAIL that save, they are affected by the full force of the power (So a DC 18 Fort save for Frozen or a DC 23 Toughness save for Icicle Barrage).
If they Succeed on the dodge save, they take HALF the effect - So Rank 4: DC 14 fort save for Frozen, DC 19(15+4) Toughness Save vs Icicle Barrage.

Also, as a side note, where did you get the +8 FROM? Assuming you were counting them as ranged attacks, you have +2 from the advantage, +2 from Dex which would only have made them +4. If they had been melee it would only have been +3 (like your unarmed, +3 fgt skill).

As with your offenses, your Defenses here are WAY TOO FAR DANGEROUSLY LOW! This is a COMBAT focused game of PL 10+ characters. The weak end of attacks used against you will be around +10 to hit dc 25 damage.. With a doge/parry of 14, they would need a 4 to hit you (85% chance), and you would FAIL on a 20! Heck, if you roll a 12 or lower, you're staggered.. 7 or lower and you're incapacitated.
that's a ~30% chance of dropping in ONE HIT from the WEAKEST attack you'll encounter.
I would also suggest getting your fort/will up to at LEAST 8-10.

These could be good motivations in a regular game, but I don't forsee any of these gaining you HP in this setting.
Top

I'm REALLY sorry about this, but I gotta bow out.

RL is gonna get super hectic for a while and I just won't have the time.

Jemal, feel free to keep Riddick in the story line if you want, I can shift control to someone who wants to play and has time to fix what you posted needed fixing. Ifnot, let me know and I'll do something bad in the hall to get him chandeliered

Again, I'm really sorry about this
"Aut viam inveniam aut faciam" -- I'll either find a way or make one

Elsa revised. Thanks for the review, i'm kinda new at this game
Top

Not for nothing but I really hope that is Death from the Disc World series. He is awesome.
Top

Alright so with the dropouts it looks like our lineup us:

Did I miss anyone?
Top

valhalla_bound wrote:Not for nothing but I really hope that is Death from the Disc World series. He is awesome.

He is indeed awesome but doesn't seem the tournament type. Just to be clear, is Aleister the same hooded figure that did the neck slice gesture to Sarkoth?
"This is all your fault! You shouldn't have taken that cat! You don't teleport into strange metal places and steal pets!"
Builds
Top

Aleister AKA the boogeyman, is the Guy talking to Elsa: 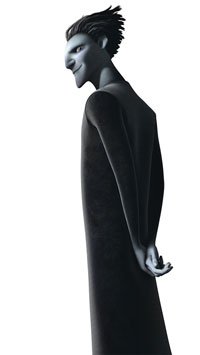 The guy who was 'talking' to Sar'koth was a grim reaper (Not Death herself, sorry Deadpool)

Ahhh. Hehe. Aleister does have a thing for ice people doesn't he?

Edit: and given his popularity as a brave hero to children...Aleister must loathe Goku...
"This is all your fault! You shouldn't have taken that cat! You don't teleport into strange metal places and steal pets!"
Builds
Top

I may know that, but Deadpool doesn't.

"You KNEW that Death is not here?"

"No, do NOT say anything. You have said ENOUGH now."

I am having second thoughts simply because I thought of doing a Krogan. Oh well. Too late now.
Top

Merlin has been updated with several minor changes to his magic array.

I presume the 59pp is for ALL of this, even though you have it listed with the advantages?
What are these senses enhancing (Counters concealment/illusion, penetrates concealment)?
Also the cryptic quirk isn't really a good quirk, since the knowledge you gain from precog is already cryptic to begin with.

Yes, that's for the power as a whole. I'll break it down in the next version for improved clarity. Rule-wise, his sense enhancement effects vision. Flavor-wise, being able to see through illusions objects etc. is based off of precog. I dropped the quirk.

Dropped. But note that the base power of his magic array has had Indirect from Merlin's original version.

First off, I presume from the fact that his non-physical attributes are changed by this, and that you gain different complications, that it isn't just a physical change?

Yep, memories are retained, but his personality shape and essence are changed.


jemal wrote:Also after going over the characters in more detail, I'm going to ask that you only take ONE of the alternate forms. Even without an alternate form, Merlin's pretty powerful, the addition of either of these forms adds a lot more versatility and power, both is just too much.

OK, I liked accentuating his cambion heritage with a separate form. But Dracoform is much cooler.
Top
Locked
216 posts